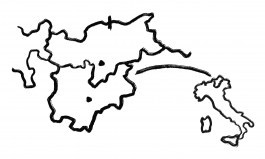 Lungomare is a cultural association founded in Bolzano in 2003. It was created from the desire and necessity to open a space in which to share differences, experiences, opinions and desires, a space in which to make the link between cultural production and the political and social dimension. Lungomare undertakes projects that investigate and test possible relationships between design, architecture, urban planning, art and theory, the results of which are presented in different formats: public discussions, conferences, publications, exhibitions and interventions in public spaces. All these formats are characterised by the intention to interact with cultural and socio-political processes relating to the region in which Lungomare is located.

Currently Lungomare’s activities focus on long-term residency projects, a format whereby Lungomare invites guests to engage and interact within the context of South Tyrol. Lungomare’s activities are based on three principles: specific attention to the context in which the association’s projects are undertaken, the transdisciplinary approach that distinguishes these projects, and reflection on the role of Lungomare as a cultural institution in connection with the region in which it operates.

The projects manifest themselves through constant comparison with the geographical, political, economic and social setting in which the association operates, as well as its culture and history. Lungomare is active within the conflicts between needs and desires related to this setting. It proposes possible re-interpretations of the perception of reality and looks for relationships with other geo-political areas, whilst always looking for close involvement with the public. The context here is understood as a framework of cultural, economic and political processes and dynamics, of institutional practices and other forms of organization, of traditions and their modern form, without neglecting the physical subjects who inhabit the region in their role as the public or participants. Guests of Lungomare explore themes connected to the local region and trigger creative processes and research that are closely related to each other.

Since 2014 the Lungomare residency programme has pursued the long term interest of the association by creating connections between the local context and international experience. By inviting guests from diverse geographical and disciplinary backgrounds to interact with the urban and regional context of Bolzano and South Tyrol, Lungomare creates the opportunity to amplify discussions, share experiences and learn from a variety of contexts. The programme is designed with a particular emphasis on research and experimentation: residents are asked to focus on cultural, social and geographical ‘landscapes’ with which they are not familiar and to develop projects that activate forms of public involvement.

Proposed projects cover disparate design disciplines, interrogating and searching for possible points of contact and experimentation. The encounter between the methods, knowledge and tools of different areas generates a transdisciplinarity that creates not only creative deviation within specific disciplines, but real and true contamination between disciplines and an openness to perceptions and forms of process which are different from those developed in the original context. Lungomare’s transdisciplinary practice ranges from design to critique, extends to urban issues, and opens up an innovative gaze on the themes it is dealing with.

The work of cultural institutions is vital to the regions in which they operate. The activities that Lungomare proposes intend to renew reflection on the nature and objectives of non-profit cultural institutions as places of reflection and areas of action that integrate the expertise and objectives pursued by public and private institutions. Added to this is the consideration given to the changes to which non-profit spaces are subjected, on their degree of dependency on regional policy, and on the boundaries of the cultural production.

To celebrate the tenth-year anniversary of its founding, the project space Lungomare opened the Lungomare Gasthaus as a temporary space for thought and action. A one-month program consisting of discussions, conversations and workshops, a series of spatial interventions, a film program and a series of public performances and actions in the city of Bolzano.

SCHOOL OF VERTICALITY is a public program for listening to and learning situational knowledge. Where on earth do we belong? What already forgotten forms of life and work can we visualize and reinvent together? Each chapter interweaves different biographies (human, animal, region) and times (geology, history, biology, dreams and memories).

Co-Carts are pop-up devices, built to be manipulated and transformed, to enter into synergy with each other and with their context and to amplify the relationship between the inhabitants and the city. 2020

YOU ARE BUT YOU ARE NOT, An audio-guide about borders and hospitality by Kolar Aparna and Beatrice Catanzaro, 2017. Courtesy Lungomare. © Claudia Corrent