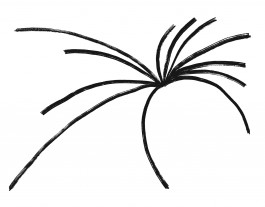 „Verein zur Förderung der Alltagskultur“ was founded by Charly Walter in 2012. A long time ago as an archtitecture student he started to organize exhibitions and as he got his own office space exhibiting art and architecture allways took place. All came to a more professional level when his office moved in a backyard building where it is located up until now. A huge room had to be devivded and it was clear that one part should be used for cultural activities.

From 2012 onwards there were at least five exhibitions each year. As time passed, more diverse activities like concerts, readings, etc. were starting to take place leading up to a large community of involved people and a program with more than 100 events per year.

Running the culture space was a personal interest first, but Charly also saw it as a possibility to do kind of public relations for his interior design office too. Since the cultural activities take place in the same room than design work, creating and negotiating a schedule of co-habition is a big challenge.

Finanzing was hard at the beginning because there was only little money from public authorities, but until now the money became more, so there is a budget of aprox 8000.- to pay expenses like a part of the rent, artist materials, printing etc.. In 2018 it came by chance to be part of Creative Europe Platform Project Magic Carpets for four years which ends in November 2021. Through this project a yearly budget of about 30.000 is added for a residency programm and a second person for curating and organisation.

In these last 10 years Openspace Innsbruck became an interesting local player in culture in Innsbruck and a serious partner of 14 European art and cultural organisations. Maybe the European project gets a three year extension form 2022 onwards or perhaps another opportunity appears so as to do international projects which other partners.

Main interests of Charly are: culture as part of any social fabric and the role of culure in democratic society.